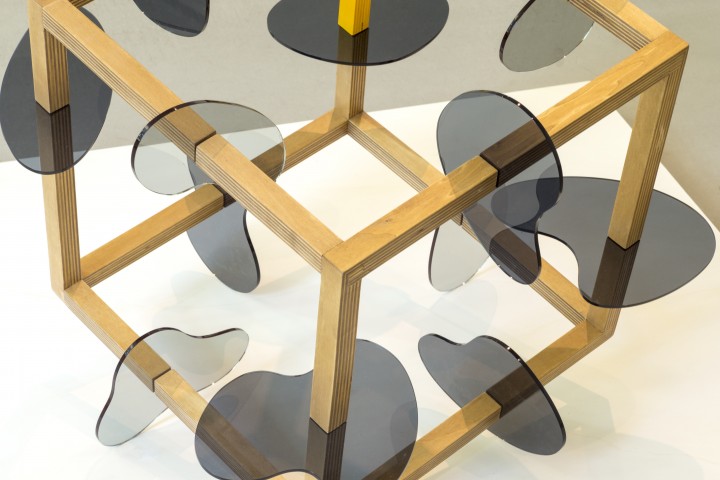 The sculptures Eddy Stikkelorum materializes in wood and epoxy have a dream-like quality. Fluidly the wood unfolds in space, as unpredictably as a ballerina without a set choreography. Of course this frivolity is but a smokescreen, since a comparison between sculptures indicates that he prefers to work in series and develops his ideas step by step. Yet it is no mean task to determine the indefinite shape of his objects and that’s exactly what this escape artist wants to achieve: to reach beyond the dictate of deeper meaning. He has always claimed that he wants to be free in every respect, and that he also wants the viewer to feel absolutely free.

However – since he has started to title his work, we cannot escape a certain guidance and interpretation. For decades it has been a dogma that abstract art should be presented to the world ‘without a title’, which was defensible as long as the work represented a formalistic game with technical data such as line and plane, straight and curved. Eduard Willem Stikkelorum (1955) welcomed this ‘indefinability’ as a certification of autonomy, since it marked a liberation from the contract situation in which he had been schooled at the Royal Academy in The Hague. But pure abstraction is ’has been’ thinking, as there is always a link with reality.

Stikkelorum’s encounter with New York in 2005 was a decisive experience. He fell head over heels for the energetic enthusiasm of the city. ‘’In New York people will not settle for petty, formal games’’, he explains, ‘’ they are busy making sure to reach their personal potential within the structure in which they function.’’ He praises their solidarity: ‘’Race and ethnicity are not an issue, you are a New Yorker. This feeling became even stronger after 9/11’’. Stikkelorum is now a regular visitor to New York and says: ‘’ Even now, when I wake from a dream during the night, it is New York I have been visiting.’’

Level-headed as he is, he observes that The Hague will remain his home, but his inner longing for New York resulted in three consecutive series with the basic title: ‘Dream of New York’ (2012-2014). A new dimension in this work is his fascination for the ‘loop’: a wooden line which searches           – intuitively it appears – its way back to its point of departure. Its circular movement sometimes appears slow, then abruptly fast, but in its entirety it is graceful in character. 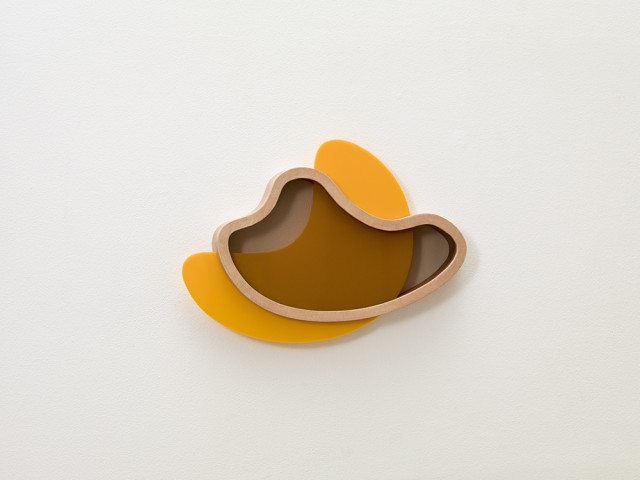 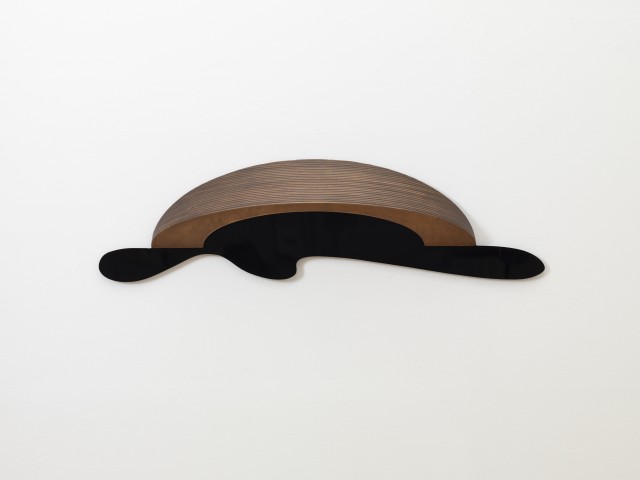 There is no escape from one of Eddy Stikkelorum’s Loops, but as an appealing vision of eternity it is not difficult to bear. In complete simplicity these abstract sculptures transcend the personal anecdote and will ‘function’ as multiple metaphors.

The physical and mental distance between New York and The Hague has nurtured further development. In ‘Restless Window’ ( 2015)  Stikkelorum appears to realize that an ideal cohesion is impossible. The two materials he usually works with (wood and epoxy) overlap each other, but no longer coincide. Despite a certain similarity in shape, they appear to wish to escape from each other’s proximity. In ‘Panic Shelter’( 2015) this faltering takes a pitch black turn. 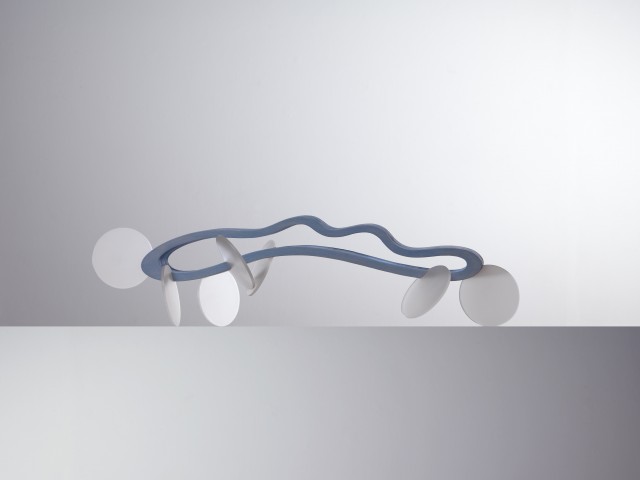 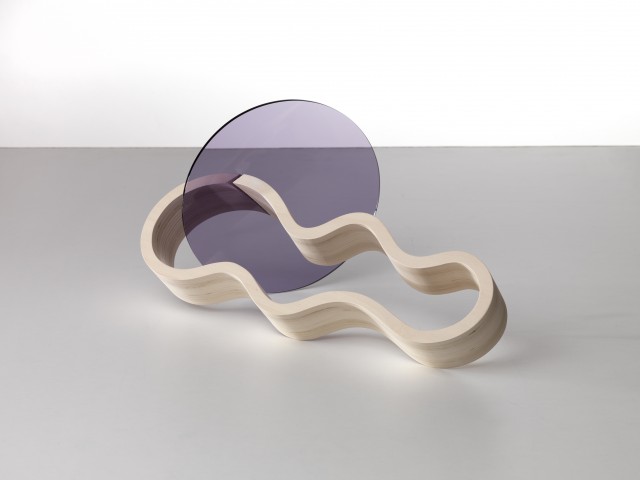 In 2016 he transcends his dilemma with a first series of ‘Interventions’; a concept that signifies both intervention and mediation. Stikkelorum demonstrates more clearly than ever that the interaction between different variables can be severe and can lead to unprecedented results. The wooden shape has become capricious and moves like a wave in turmoil. The plastic mould has been reduced to a perfect circle, but can apparently cut through wood. In short, the encounter is razor sharp. Since the image remains abstract, there will be a large range of possible interpretations, but the word ‘intervention’ makes it crystal clear that Stikkelorum intends to portray a major event on the intersection of two worlds. This may be the tangible discrepancy between a peaceful city along the coast of the North Sea and a hectic metropolis along the Atlantic Coast, but it could also be a paradox in modern physics. What could we learn from a culture clash? What is the ratio between wave and field? The elementary shape of these sculptures invites one to happily dream away. 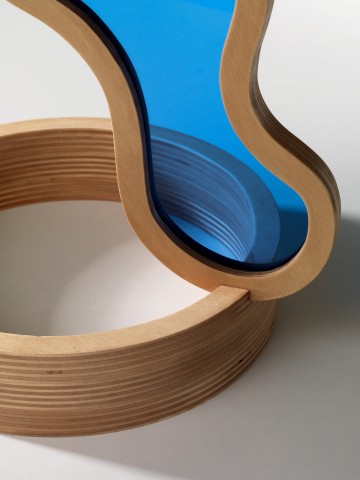 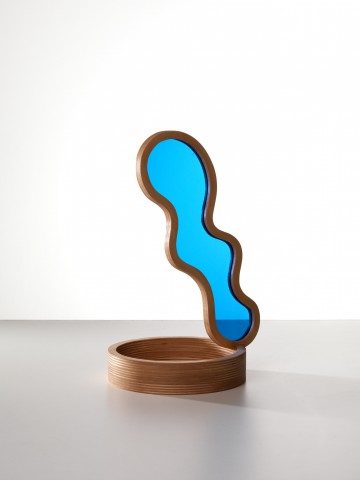 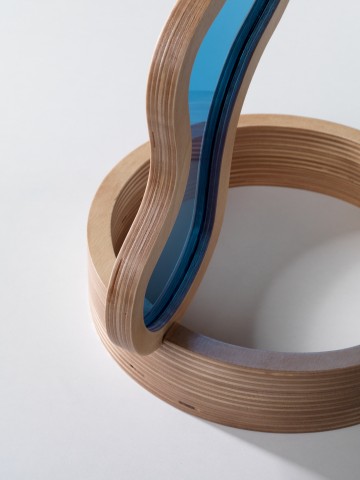 What helps here is the quality of elusiveness that permeates his works. Generally speaking, contact with the ground or a wall is comparable to a fleeting kiss on the cheek. There is such a great desire to escape the law of gravity, even though Eddy’s physique would suggest otherwise. He is well rooted in life, which is not to say that he has not been visited by Father Time, or as the French aphorism goes: ‘Tous les matins sont sans retour.’ Although the sun faithfully keeps appearing on the horizon, not a single morning ever returns. Stikkelorum and his cyclic Language of Shapes have touched or affected an everyday, but also vital phenomenon. Although ‘wood-finishing’ has a high ‘cuddliness’ factor, the shapes resist any idealization or desire for perfection. Asymmetry pulls the image back into both sober reality and the unpredictable vagaries of fate.

But it looks as if there is a reversal going on in ‘Jump Around’ (2017), after all. The role play between wood and epoxy has reversed, and the encounter between the capricious and pure form has lost its weightless character. You might say that the ‘Dream of New York’ is now searching for a solid base. In his second series of ‘Interventions’ there is a more emphatic search for stability and contact with the ground. This has partly to do with scaling: a larger sculpture does not have to be placed at eye-level. Nevertheless it appears as if in this recent work Stikkelorum is searching for an established model, one in which theory and practice are reconciled.

At a glance, however, it is the elusiveness that prevails. Despite the fundamental character that is implicit in pure abstraction, in all Eddy Stikkelorum’s work there is an atmosphere of air and light. He is a builder of images, and due to the use of unobtrusive materials he creates a lot more space than the classical sculptor. His focus lies not only on the materialized shape, but also on the ‘nothing’ that permeates the construction. For him space is a refuge where you can breathe deeply. By distancing himself from his academic roots – designing an interior and situation related sculpture – he has raised the concepts of interior and space to a higher level. The hallmark of his work is research into inner space.